I'm a fan of nice documentation. You know the kind: it has the right examples for all the complicated stuff, sane organization of all the topics, and isn't just an autogenerated list of all the function names or API actions. Solid documentation is one of those rare vintages that you slowly imbibe and learn every nuance and tasting note of it. I'm sure I'm not the only one, you can confide in me (and the Internet). I'm going to let my documentation freak flag fly high and proud!

Not surprisingly, when I thought about putting together a way to generate standalone, statically hostable documentation, I turned to the tool that has its own well-organized, example-laden, good to the last drop documentation site: Gatsby. If you haven't heard, Gatsby is:

This very blog (at least at the time of this writing) is generated from Gatsby. The TLDR version: Gatsby uses JavaScript modules to convert content of various dispositions and sources (both file-based or service-based) and generate React-based, statically hostable websites (there's GraphQL baked in there as well to glue it all together). You can do some weird stuff if you wanted, for example: correlate your Google Calendar with your Twitter feed and create a timeline of all the tweets that you missed during your busy calendar times, then format it into mobile-friendly web page. Wow. So useful.

However, it does have some redeeming qualities, primarily the MDX JS library. MDX is Markdown + JSX and lets you write Markdown files that can also contain JSX code and markup. If you want to know more gory details, head over to the MDX page.

I'm not going to go into how a Gatsby theme works or how you too can make one. That information is generously hosted over on Gatsby: Themes. Instead, I'll focus on what the sample project looks like and how you can use it. You can jump into the example site here: https://gatsby-theme-devdoc-example.netlify.app/, and look at the source code that generated it here: https://github.com/garoyeri/gatsby-theme-devdoc/tree/master/example (the theme itself is in that same repository).

Here's a screenshot if you're impatient: 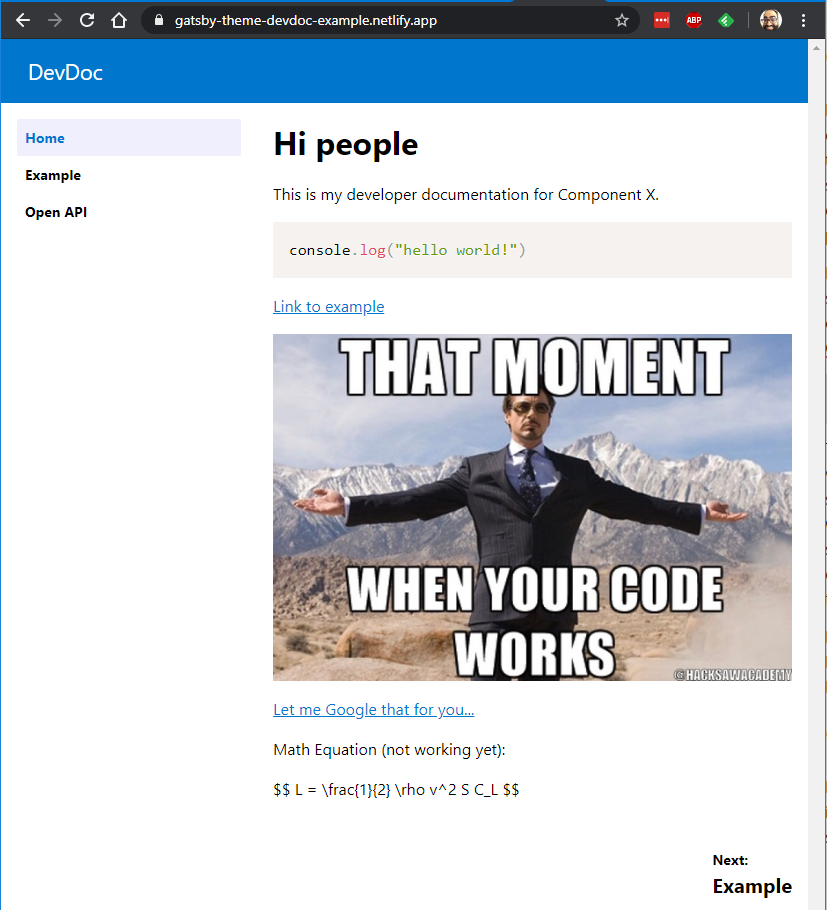 To generate this site, we start with a template like this one: https://github.com/garoyeri/gatsby-starter-devdoc. If you want to run it on your own, you can clone it into a new folder, then:

And after the entire Internet is downloaded into your node_modules folder, you'll get a local site running on http://localhost:8000. But let's take a deeper dive into what's in there.

A plain, ordinary package.json file, nothing terribly fancy. It has some dependencies that we should review:

The scripts are pretty simple too:

Most of the time, you'll be running develop and building up your content. For your deployment into your web host, you'll run build once and deploy the contents of the public folder.

If you're a fan of yarn, go ahead and delete the package-lock.json file and run: yarn install to setup for yarn. (I haven't tried it with yarn v2.x yet).

This file is picked up by Gatsby during the build process. It must be named gatsby-config.js and most of them will have a similar look and feel.

If you look at the gatsby-theme-devdoc repository, you'll notice it has its own gatsby-config.js file (that has a LOT more stuff). When you include other plugins, Gatsby will include their configuration files as well. The order of plugins is important, and they will be processed from top to bottom. Some plugins on the Gatsby Plugins Library will have some warnings about which plugins need to come before or after other plugins.

Your intuition is not deceiving you, it is not a coincidence that the folder name is gatsby-theme-devdoc. Gatsby themes support a mechanism called "Shadowing" that allows you to override files from a parent theme (or plugin).

BEWARE: if your theme or plugin doesn't start with the text: gatsby-, then the Shadowing WILL NOT WORK. The Gatsby build process puts special consideration towards anything that starts with its own name and treats it particularly well. This is also a good indicator of libraries that can't just be included, but must be configured in a gatsby-config.js somehow.

Ok, so the MDX file is just a simple unordered list of links. This file will end up on the left side of the website as a menu of page links, but will also inform the "Previous Page" / "Next Page" links at the bottom of the page. You can add other content to the sidebar as well.

Any Markdown pages (either .mdx or .md) you place in this folder will get converted into documentation pages. For example:

The hyphenated section at the top (the frontmatter), has an optional title tag that can override the title of the page in the HTML header. If you leave it off, it won't hurt anything. You can add extra content to the frontmatter if you want, and add some regular Gatsby pages (or MDX) to do something with it. MDX supports embedding GraphQL queries that you can use to either pull metadata content about the site, or act on other input sources that you add in your own site or are already generated from the theme or other plugins. To see what you could mess around with, run npm run develop, then access the GraphQL console: http://localhost:8000/__graphql. The Gatsby documentation is a great source of guidance on some of the possibilities.

PrismJS is configured and included to all syntax coloring to your preformatted Markdown blocks. Just include your language name (Prism JS Supported Languages) and it will do its best to render the text nicely. If you use the bash language, you can make a shell prompt example. See here for more info on what other qualifiers you can add to the block: https://www.gatsbyjs.org/packages/gatsby-remark-prismjs/. Line numbers are not turned on, and I've included the default theme for now.

If you need to make some diagrams in your documentation and don't want to paste images from whatever tool you're using, you can write up those diagrams in Mermaid. To embed the diagram in the site, just create a preformatted block using the mermaid language tag, and describe the diagram you want. If you want to see how it looks, you can use the Mermaid Live Editor to draw it out and see examples.

I'm working on adding support for katex to embed mathematical equations and formulae into the site using MathML. The first time I tried it, things didn't work out very well, but with fresher eyes, I think I can get it to work properly. Once done, it will allow you to create blocks of mathematical equations that will be beautifully rendered on the page.

When working on API documentation, it's pretty much required to have an interactive tool to make calls into your API and show the developers how the data is structured. To add Swagger UI to your markdown, you need to first import your JSON or YAML API specification (or you can reference a URL for the content, it will fetch the content and generate the documentation).

You can also see the example code here. And see it in action here. The tag for <SwaggerUI> takes the parameters specified in the Swagger UI documentation. Note: the import statement should be at the top of the page after the frontmatter. If you put the import first, it will ignore the frontmatter.

Taking the "starter" example can help start building up a documentation site fairly quickly (the default template is not terribly ugly). However, learning the basics of Gatsby and how to navigate the tooling is essential.

MDX is super flexible allowing us to plug in custom tags along side regular Markdown and regular HTML tags as well. The Gatsby documentation has a LOT of examples.

Reading the MDX documentation, while exhaustive, is a LOT more technical and harder to grasp without a firm understanding of React and JSX.